The accomplishment of Kwan Yin

We have three images of Kwan Yin and a ten-minute teaching to set up this Generation Stage meditation. The intention of the advanced level of The Practice of Living Awareness is to realize qualities of innate Beingness and to bring them forward such Beingness is increasingly the quality of one’s livingness. 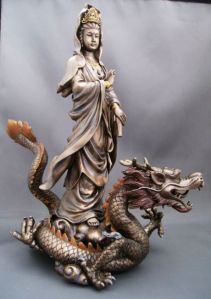 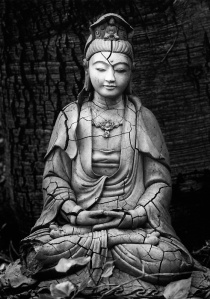 Kwan Yin demonstrates the taming of the tendencies of chaos within us. As we do so, we learn that composure is a mighty skill and that discipline serves us well in all circumstances. Passions that have ruled us now are ruled. Inner fire (kundlalini) now can rise safely and at Composure’s command.

Kwan Yin also demonstrates regal authority. In this role she is he – not because men are authoritative or regal but because of energy. Composure can now assert on a comprehensive scale. Dragon energy has been harnessed. Methods of how to do so can be communicated and practice.

But all of it is only possible because of the effects of meditation – thus the final image of Kwan Yin.

This meditation requires  several meditative capacities of the practitioner – but those in any measure that one can bring forward – just like innate Beingness.

3 Responses to The accomplishment of Kwan Yin