Note: this is an old post (March 31, 2015). The information is worthwhile though the alignment is past.

This full moon cycle is mirrored by a celestial alignment. Astronomically, the Sun is in the Bull (Taurus) and the Moon will be in Scorpius (the Scorpion) for the full moon. Interestingly, primary star systems within the same two constellations are also in opposition: Antares in Scorpius and Aldebaran – the eye of the Bull – in the Bull.

Antares means “not Ares”. It indicated to the early sky watchers that this reddish star was not the planet Mars (Ares). However, the deeper meaning is that in Scorpio, one is to transcend the Mars rulership of Scorpio and move into the higher functioning of the sign. The animals associated with Scorpio portray this evolution.

Aldebaran – the Eye of the Bull – in Taurus restates the idea of perspective, clarity, and of  perceptions that hold us in duality; that is until “thine eye is single.” Then, epitomized by the Buddha, all intentions and seeking are bent on one thing: Truth of Being. The bull will takes its time but will also overpower any obstacle. Those hindrances are within the desire nature itself which scatters our forces, money, time, and convictions. The eye is not single when a person is living according to desires. But, as the fixed cross makes the life increasingly discontented by the focus on outer satisfaction, the inner moments of peace and beauty call. We are coming into focus. Priorities are being rectified, the bull is being harnessed.

These two celestial points call humanity away from aggression and personal gratification. They point out the small or no-mindedness of living according to the sting or venom and then slinking away as well as to living according to the whims of fancy and desire for desire sake. It is time for light – for humanity to step onto the Path as one unified whole. With the humanity’s focus directed on will as the instrument of compassion (thine eye is single), all fields of human endeavor will be newly plowed, burrows of the psyche plumbed, and we can arise from our current ashes illumined.

* In the graphic below, Aldebaran is indicated by the radiating circle on the Bull’s brow and Antares is the bright star on the head of the Scorpion. (Double click on the graphic to enlarge it.) 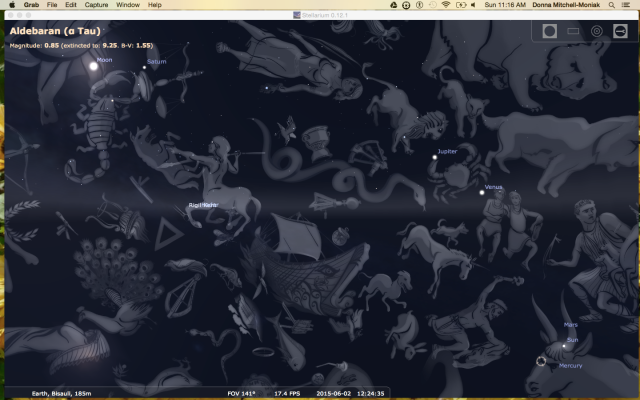 3 Responses to Aldebaran, Antares, and the full moon cycle