Posted on September 10, 2020 by Donna Mitchell-Moniak

Impermanence equals change. Because all things, people, societies, cultures, animals, systems, emotions, thoughts, beliefs (and anything else that can be named) are impermanent, transition, transformation, learning, newness, inventions and discoveries can happen. Because of impermanence death, birth, aging, seasonal changes, climate disruption, value and devaluation happen. Experiences, living life, and going through one’s day are each a series of one change after another. Some have the appearance or felt-sense of duration such as the length of a life, how long before aging starts its precipitous decline, years in a marriage or job or living in one place, or long-term friendships; yet all of them will succumb to impermanence. That’s just how phenomena are.

No ill will is intended by Nature or this Truth, rather the opposite. Understanding of Truth, letting go of that which will ultimately be gone anyway and, furthermore, realizing that all things (ALL manifestations of everything) come and go proffers in-the-moment presence because that moment will never be again. Rather than clinging to what was and thus not being present to what is, through understanding that all phenomenal expressions are impermanent liberates a person into the richly textured, vibrating nowness of the only now that is and will ever be.

Colorado went from this  to this within hours on Sept 8. 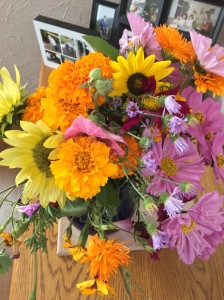 Due to the efforts over years of the Anderson, Kircher, and Meyerson families, the little hub of Jaroso (less than 1/2 mile square) has been planted with trees and flowers and become an oasis in the semi-desert and a haven for raising young birds. It also is a significant stop-over for migrating birds who forage for seeds from all the flowers or variety of pine and spruce. Little yellow-capped finches showed up less than two weeks ago foraging seeds. The addition of my garden-back yard and its profusion of new wild flowers meant that the migrants and those who stay through winter have been feasting fully in our few yards. But, lo, impermanence.

The sudden change in the weather took an immediate toll on the migrating birds. They don’t have the feathers or built up fat for altitude cold and the winds. They, literally, were dropping dead. We’ve been putting out bird seed several times a day, filling the humming bird feeders as many times as well. I don’t feel that I’m clinging to the birds but, rather, honoring the interdependence of us all. I have thoroughly enjoyed their song and color, watching the babies learn, and the freedom that they represent. Trying to help them through this sudden and not-lasting cold and snow is an honoring of them and our shared being.

One little bird died near my door between putting out more seed. I brought it in, put it against my bare stomach under my sweater, and then a lap blanket for both of us. I figured if it had just succumbed, the warmth of my body and thoughts would revive it; if not, then may the consciousness of this little being go to a pure land of joy and warmth. The combined actions set a relationship between us that will be forever. We will meet again.

Visit www.blazinglight.net for additional meditations and blog posts.
View all posts by Donna Mitchell-Moniak →
This entry was posted in Life's Insights, Mahayana. Bookmark the permalink.