Posted on August 25, 2019 by Donna Mitchell-Moniak

The 11th house corresponds to Aquarius which is a Fixed Cross, Air sign. This house is related to organizations, causes to which one allies, the type of groups one belongs to and, thereby, to overarching ideas, beliefs, or philosophical principles to which one hearkens. Those can be the ones espoused by racist groups or extremist beliefs and sentiments of any kind, ecological or environmental ones, or ones of social justice. The 11th house asks, “What is your world view?” “In what do you believe?” “With what type of people do you feel you belong?” “Of what are you a groupie?” 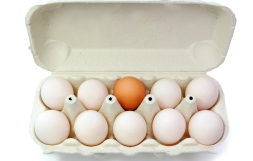 Psychologically, the 11th house indicates where one wants to belong, and the sign on its cusp suggests ideas that give one comfort, make sense, or for which one is willing to sacrifice. For example, a groupie of a music group enjoys that group, its message, as well as the type of people that come to its shows. Someone caring about the environment will feel impelled to do what he or she can to foster well-being for it. That person takes comfort in doing what one can and informing others of what they could also do in this regard.

From an evolutionary point of view, Aquarius is future-oriented, purpose-directed, wide-minded, inclusive in considerations, and willing to work to make envisioned ideas manifest. These attributes align with Uranus, its ruler, as well as with Saturn, its age-long ruler before Uranus was discovered in the late 1700’s. Saturn is right-response to situations with long-term well-being as its goal.

Human beings live from their point on the spiritual Path and their capability for growth, renewal, and responsiveness.  Aquarius can get stuck or fixated. Strong Aquarius in the chart can demonstrate as intransigence because things should remain according to an idealized sense of how things were and, therefore, should be. White supremacy in the face of ever-increasing human diversity or head in the sand denial of climate disruption are examples of this. This is especially interesting given that  the energies of the Aquarian Age are already waxing into human consciousness.

From a spiritual path point of view, the 11th house is about walking the walk. Talk is just air. This air house has Uranus, Jupiter, and the Moon as rulers.

From this forward-directed, wide-minded point of view, planets in the 11th house are to be lived as such. For instance, if Venus is in the 11th, it would not be focused on one’s personal wishes and wants, comforts and how to get them. Instead, Venus would be lived as the understanding of inter-connectedness, inter-dependence, and inter-being of all in existence. Venus – so long lived as “my and mine” – would be lived in support of the whole of which one is a part to the extent that the native could. “Inter” or mutual or related would always be in one’s mind, heart, on one’s considerations and decision-making. Cause, condition, and result would be obvious and would produce a certain wisdom from which this person would live.

Using Venus as an example, one would look at any planet in the 11th house with the eye of  a non-personal orientation in service to the greater good, the greater whole, to large-minded, benevolent ideas, and to the collaborative functioning of all to that greater good.

In order to do so, the native will have to be Uranian with the planet in the 11th house. He or she will have to chose to live that planet’s qualities, skills, and attributes in a fresh, new way and not from old or patterned way. To live the planet(s) in the 11th house in a Uranian way  would require freshness, daring, and an undoing of a by rote manner with the qualities or attributes of that planet. One can see that this view and understanding of 11th house planets is – itself – revolutionary (a classic Uranian and Aquarian quality).

Under the influence of Jupiter, Aquarius’ esoteric ruler, the native is being asked (by his or her higher nature) to open the heart in every way related to the planets of the 11th. Guided by this openness in every situation and in all circumstances, the native gives generously through 11th house planets of time, expertise, money, and anything asked or needed. Iif this house is uninhabited (no planets), then the sign on the cusp indicates how and why generosity and bodhi-being are given. Awakening the heart of the mind is also indicated under Jupiter’s influence because this is an air house. Also, Jupiter expands or increases that which it touches and attempts to bring forward the understanding that abundance already exists. Abundance might require assistance from others to be utilized, or an alternative suggestion about how to use what is present, or equality and partnership to produce a shared, collective, benevolent response to any need, but abundance is energetically present.

Relatedness and energetic, interactive wholeness is the foundation of cognitive understanding in the 11th house. Everything is proceeds from this evolutionary ground. A materialistic, involutionary view would oppose unity, decry relatedness and interdependence, and deny causes and predictable results. The evolutionary turn of the spiral is that of magnetic impulse: vortextual forward-going as one whole. We see this in the great structures of cosmos, such as spiral galaxies.

The Jupiter influence will likely produce sensitivity in the native regarding how the planets in the 11th house are personally experienced. Sensitivity is good! It is a mark of opening, of empathy and care. If one is feeling the suffering of others, then one will share in addressing suffering. One will produce the causes of goodness through one’s life.

Jupiter’s influence can also produce joy, an easy-going attitude, acceptance, and such features of equanimity. These would be lived in an evolutionary way not as personal bliss for its own sake or acceptance as a form of abdicating responsibility.

If one is responsive to the Moon’s hierarchical influence upon the 11th house, then planets in that house represent non-attachment and perceiving through the transitory and illusory nature of commonly accepted reality. The Aspiration of Samatabhadra states, “All that appears and exists, … has one ground, two paths, and two results. It is the display of awareness and ignorance. …. The ground of all is uncomposed, an inexpressible, self-arisen expanse without the names “samsara” and “nirvana” (or any names – dmm). If it is known, buddhahood is attained. Not knowing it, beings wander in samsara. May all beings know the expressible ground.” 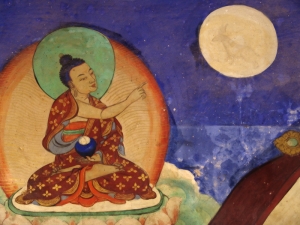 The hierarchical Moon, like the moon in the night sky, is an ever-present reminder of our choice in how to view and interact with anything and anyone. The quotation offers that each moment begins from one ground, and that there are two paths to chose from at any moment. They are the choice of awareness which includes the knowing of relatedness, interbeing, mutuality, and of the heart of mind. Or ignorance which includes self, self-importance, singularity, disconnectedness, and the lower vibrating ways of living. Two distinct results will be born from either of these choices. One is beneficent, one is detrimental. One is helpful and life supporting for self and others, the other is harmful for self and others even if not recognized as such. The hierarchical Moon’s influence upon the 11th house also offers an openness to and being unafraid of deconstructing the mind’s long-habituated systemizations of reality and physicality. This allows the ephemeral and illusory nature of the physical dimension(s) to be increasingly understood and lived in one’s life.

Planets in the 11th and under the Moon’s influence are, therefore, not as they seem. One would want to investigate authors that have written on the hierarchical turn of the spiral of planets that you have in the 11th or contemplate their highest, liberated expression in order to avail yourself of what might be possible in your life expression and service in the world.

Ultimately, the 11th house is a house of service. No matter what turn of the spiral one is  living from, the planets in that house are to be offered in service to the others and the greater good of one’s family, community, profession, and the world.

If this house is uninhabited, then the native’s service is not hampered by any personal influence, per se, but also not particularly supported. Service is still rendered, of course, as that is fundamentally why we incarnate. Look to the sign of the 11th house cusp for what is encouraging and influencing one’s service. And, if that cusp sign is ruled by any of the three rulers of Aquarius, then call them to bear to your life as lived through the 11th house.

An uninhabited 11th – like all other houses – is still under the unseen influence of any of the three rulers associated with the archetypal sign of that house. Determine how you can live each house fully, use the experiences related to that house wisely and with great compassion. And, set yourself to the best that you can offer through each house of your natal wheel through all the influences that are available.

Visit www.blazinglight.net for additional meditations and blog posts.
View all posts by Donna Mitchell-Moniak →
This entry was posted in Astrology. Bookmark the permalink.