Restating the importance of the eclipse of August 2017

Posted on January 1, 2018 by Donna Mitchell-Moniak

As the old year becomes the new, there is much to ponder and learn from: wisdom to embrace from experiences and that given by others, as well as honorable traits highlighted through 2017 that now seek more full embodiment. Assisting countless people was the Solar Eclipse of August 21, 2017.

If any point of your birth chart was transited by the eclipse and its accompanying elements of a grand fire trine, then – from this astrologer’s point of view – those energetics are a theme for the rest of this lifetime. Furthermore, the exactitude of what was transited by this fiery eclipse indicates something about your next life: that which you will bless it with and/or the default troublesome habit(s) you will bring to yourself and those around you.

If the solar eclipse of August 21, 2017 touched your chart, it was pre-planned and fully orchestrated by your higher nature (Soul, triad, buddha nature: call it what you want). If lived for the blessings intended, you can accomplish tremendous transformation. If not – out of non-knowing your chart or the significance of this astrological event or out of hubris – the backlash will not be fun. The difficulties produced will also be a constant echo from these celestial transformers calling you to awaken to the beneficial change that has been offered and is consistently possible. 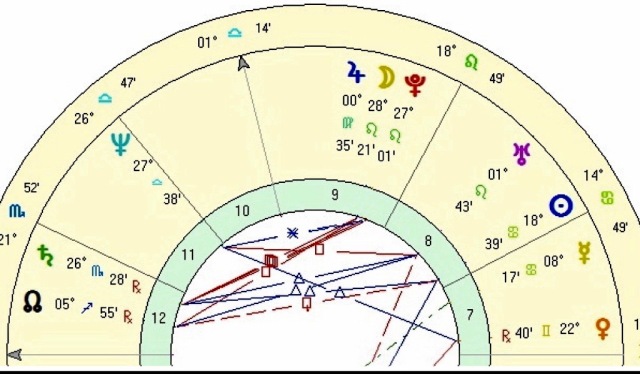 The luminaries were accompanied by an entourage of planets of transformation. Mars at 20° Leo conjuncted the Sun/Moon. These three were trined by Saturn at 21° Sagittarius and Uranus at 28° Aries. With all three fire signs inhabited and within a 10° orb, a grand fire trine is constituted.

Powerful as that is unto itself (and it is), the Sun/Moon/Mars conjunction restates the power of the grand trine within its very constituents. Esoterically, I see it like this:

On the high side, radiant light – its clarity and wisdom, and the warmth of the inclusive heart are two important qualities held before us through these planets and their signs. This applies to the USA which was coast-to-coast traversed by the eclipse, to Donald Trump whose chart was transited, and it applies to those whose charts were touched by it.

On the low side, combativeness, the fallacy of egocentricity and the hole of karma that it digs for itself together with the trail of anxiety and suffering it causes for everyone else are indicated. Let us be clear here, combativeness could be an internal dialogue that one has with oneself, it could demonstrate in the aggressive way that one chooses personal preferences in deference to a “higher way,” and combativeness displays in how one uses free time: is it used to cultivate Truth of Being or is it pissed away in video games, TV, distraction and mindlessness?

The transformation of Lightedness begins by looking truly at oneself and plucking up the courage to call oneself on one’s bullshit. Truth of Being can then be discovered as the veneer of transparent emperor’s clothes are sloughed off. Furthermore, the new Aquarian Age will not condone aggression for its own sake, hubris and its stupidity, nor self-centeredness as a default. It is a new Age and humanity must leave behind its combative predator-prey tendencies. Aquarius is the sign of “we,” of interdependence and inter-being.

I know several people whose higher self pre-placed this configuration in their now, including myself. Like Halley’s comet coming once a century, the configuration of the August solar eclipse is particular and not frequent. If you chose to birth yourself with planets that would be touched by this luminous and powerful event, that is purposeful and not to be squandered.

I will be offering Astrology and Esoteric Astrology online courses through the year. The first is a six-week Introductory course which I would suggest to everyone because of how I approach astrology. It might offer even those with astrological knowledge something new. The rest of the year’s courses will roll out layers of esoteric astrology and how to use its three levels of rulership together with the orientation of the higher nature as the driver and purpose of the incarnation.

Therefore, please take the courses instead of asking for thoughts of the eclipse to your chart. You will be much better served by learning to see and think through these buddhic indicators on your own. That knowledge and its wisdom will then be available and at your disposal.

Visit www.blazinglight.net for additional meditations and blog posts.
View all posts by Donna Mitchell-Moniak →
This entry was posted in Astrology and tagged August eclipse. Bookmark the permalink.