Posted on January 9, 2015 by Donna Mitchell-Moniak

Adding together 2-0-1-5=8.
8, the infinite relation of cause-result is the energetic of this year. That which goes around 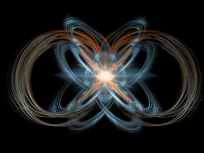 comes around. Therefore, this year will hold one’s self-made reality in view, keep it tactile, and ensure that the results that one has created will remain tangible. This will be so on individual, national, or large scales. If what has been seeding is positive or of benefit to others, the feedback loop is asking for recognition and celebration. If the obviousness of cause-result reveals the seeds of negativity or limitation that one has set, then acknowledgement and change will be required. Opportunities of either celebration or change will be offered many times through the year. One’s responsibility is to notice and act.

2 begins the sequence of numbers. 2 represents all forms of duality, dualistic thinking, and rending into parts that which is one whole. 2 is relation: fundamental, cosmic, personal, and natural. This millennium of 2 is still in its earliest phase, still setting the tone for 1000 years of expression, therefore relation is in daily news and forefront in our lives, such as the relations between nations, of the people within a nation’s borders, the relation of humanity to itself, of humanity to other forms of life and the planet, relation of the body, spirit, mind complex that is a human being, relation of cause-result that is the ongoing source of self-made reality and the human-made world.

What humanity does to the soil, the air, the water = relation. Our relationship to philosophical or metaphysical truths such as life-death, birth-decay, heaven worlds and reincarnation are forefront and will continue to be as humanity marches toward 2025, the first quarter century mark in the new millennium.

This year, we are encouraged to realize that when we think that all relations are not equal

that this is an aberration of the mind. Light and dark are equal in importance and quality. Wet and dry, bee and flower the same. The mind chooses according to preferences thereby valuing one over the other within the entwined set of two. The two are one whole, essentially inseparable because neither can be known (light or dark) or survive (bee or flower) without the other. Thus, 2 leads to the understanding of oneness as true relation. Ultimately, this is the energetic tone and realization of the millennium of 2.

0 is next. Naught, empty, infinite, immeasurable, and beyond conceptual assignations, 0  reminds us that nothing is only as it seems and is always more than it can be defined as. 0 is Source if one’s idea of Source is without name, label, or finite anything. 0 is oneself if one chooses to explore the truth of Being and what that might express as through name, gender, tasks to be attended, or left undone. 0 is the peace found only through such exploration and brilliance meeting one at every turn. 0 is possibilities for humanity should humanity actually desire them. 0 is both the free fall of simple truths and the flight of understanding.

1 represents all forms of identity, therefore all identification, the need to identify, to codify, to isolate this from that or this as that. 1 is you and I believing that there is such, and then foisting that upon the rest of existence. 1 is assertion and insistence in the most amazing ways of benefit and use and the heinous as well. 1 is both our challenge and our necessity. We must live it, get lost in it, create by it, then let it go. 1 is how we relate, kill each other, and embrace each other with tenderness. 1 is close, as close as the world: the one world of which we are a part.

5 is mind, knowing, thinking that we know, discovering that we don’t. 5 is mystery,

skepticism, questioning, and clarification. 5 is the five senses, the five aggregates, the five wisdoms, and it is the Soul. 5 represents our complexity, multi-dimensionality as beings, reminds us that we are more than a reaction or fear, more than a delight or musing. 5 is a human being trying to figure out what that means and holding the fullness of its meaning as often as possible. 5 is Venus, wisdom and light, clarity, lucidity, and awareness. 5 is Leo, the fifth sign as well as its opposite, Aquarius, into which we are moving. And 5 is Sirius, the great star system to which the highest wisdom of our planet is aligned.

As human beings, we have the capacity to wonder about, discover, and align with the greater forces. They are always at play. 2015, as a number, is a contrivance as are other calendars. Yet all enumerations of time have the construct of energy behind them. Each attempts to mark or honor the greater forces that are at play. Reflecting on such things is worthwhile, and living from an understanding of them, even more.