Posted on June 9, 2013 by Donna Mitchell-Moniak

An inner tremor accompanied the arising of a third stream of energy, no color, no sound. It arose straight to just above the center of my brow. Three eyes opened. Seemingly without cause, my teeth felt like fangs and the sense was that if I bit into something the hold would last a long time. I was, and yet was witness to, the mystical vision-teaching that followed.

My fangs were over the edge of the world, of space and time, and all existence. Three eyes bulged out of the fanged face of Mara, lord of delusion, separateness, and desire incapable of ever being fulfilled. His wrathful face frightens people, but one can feel that his disfigurement is from his perpetual lack of contentment, and we can only have compassion for this expression of unawakened Being. I/Mara peered into the world. The play of passions and the automatic totally predictable results went round and round inside the wheel of the world. No wonder all worlds are round, I thought. The wheel of interdependent causality makes it so. One thing begets the next which becomes the cause which begets the next result and so forth. Round and round we go, creating a karmic wheel of limitation, time, and incompleteness. 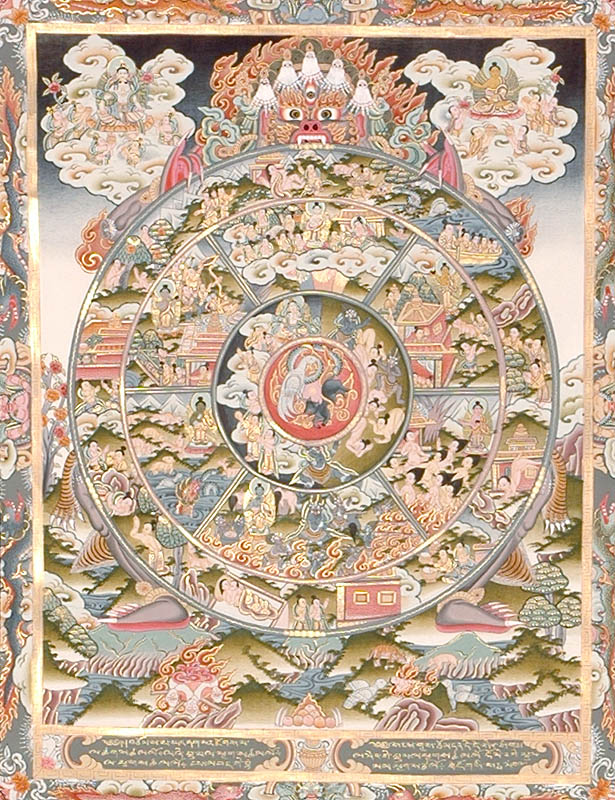 At the center of the Wheel of Life was an inner circle containing an uncoiled snake, a rooster, and a boar. Snake slithered around the outer edge of the inner circle, first slowly. Cycles create an experience that we equate with time. Cycles bring something back around as if brand new, and it is, but it isn’t. Like near-sighted Snake, our awareness is close to ourself, intricately related to the texture of the ground of identity.

Snake sped up, faster and faster and faster. Only pure energy was going around, no thing identifiable as Snake just as no thing is ultimately identifiable as person. The center of the Wheel of Life grew white hot and a pure red dot appeared as the seed of potential. The whirling arms of the Hindu cross of creation, the swastika, fanned out into the blankness and from its center birthed sounds, vibrations of creation and creatures, and cycles of existence.

Then Snake, in ouroboros style, began to eat its tail. Its stomach grew. I thought this must be from all existence being digested by the mouth of Karma. And that was so, but then Snake exploded into Glorious Dragon. In time, we consume all that we have done and been and learned only to discover that we are the seed of creation and creator. We are Dragons of Wisdom and are the Dragons of Compassion.

Rooster began to strut. He clawed at the earth for whatever little thing might turn up. He pecked to see if it tasted good or satisfied his senses. He ruffled his feathers, preened, shook dust off, and scratched the earth some more. Clearly, Rooster felt very cool about himself and whatever he scratched up, although I did not see anything.

We are Rooster. We eek out an existence, strut our stuff – skills, intelligence, body, the latest gizmo or accomplishment, the current drama, happiness, or loss. Little by little, Rooster grew backwards and became a chick. Soft, vulnerable, innocent, not male or female. It peeped and its sound was in harmony with the silence; Rooster had not crowed with his voice but certainly had with his demeanor.

Then baby chick flapped its wings, once, twice, three times … poof. It burst into flame and Phoenix arose from what had been. He flew off the ground, left the inner circle to fly around it a few times, and then like a peregrine falcon dove to the center of the center. The whole middle collapsed into the black hole Phoenix had created and then the whole Wheel of Life and Mara began to be sucked in.

Mara’s three eyes bulged out with fright and rage. He roared and sought for something to hold onto to stop him being absorbed and stop the collapse of the illusionary world he sustains. But there was nothing to hold onto. Mara’s world is an illusion, a two-dimensional figment of our collective hubris and pride. As Mara’s eyes got blood-shot panicked, Boar charged like a train out of the black hole Emptiness that Phoenix had birthed.

Boar turned things over, didn’t just scratch the surface. He rammed, jammed, snorted, rolled. Boar’s engaging of the textures existence would keep the Wheel of Existence from imploding back into Emptiness. Boar’s tusks can pierce and then not let go like Mara’s teeth. Boar dug things up: nuggets of regret, of truth, roots of meaning, causes and traditions, truffles – maybe trifles. His nose was in everything.

He would shake off the dust from his back and face, and the karmic Wheel of Life and Causality would expand back into more functioning. Mara smiled. And then one could see that Mara has a striking resemblance to Boar. Ahh, Mara is physical existence itself and all that goes with that. And, since physical includes realms of energy and cognition that are shared by quantum particles, gods, demons, and spirits then Boar has a lot of textures to root about in.

Somewhere in the distance the thump of a very large footstep could be heard. Mara’s eyes blinked again. He looked in every direction and clearly did not like what he heard. Boar stopped being self-absorbed in the hunt for instant gratification. In a flash, Boar was she-pig birthing countless piglets who would birth and nurse more and more. Causality again; and that our suffering is, as the Buddha said, always linked to our attempts to satisfy ourself or produce happiness. But the ways we do so never will. Instead piglets of craving are born that then have to be satisfied, over and over again.

Another set of footfalls. Boar now was the she-pig that could no longer bear young. No thing truly and never can. She stopped.

The footfalls became her heartbeat and she slept. In her sleep she grew. She crowded out Rooster and suffocated Snake with her immensity. She was now bigger than the center of the Wheel and was changing. Her snout elongated. Her floppy ears grew huge, and her curled tail straightened and extended. When she woke up, she was Elephant. And Elephant remembered.

Elephant joyously trumpeted. She danced and her feet were light but firm and shook the  Earth. She was a power to be understood, not reckoned with. Elephant, the power of the illumined mind, started to suck up the inner circle. She was the Emptiness. She was absorbing the Wheel of Life and Causality into a great samadhi and bliss. Mara was in a complete panic. She looked in his three eyes, hoping that he would see what she could: that he was empty and had nothing to lose, nor could ultimately sustain his ruse.

Phoenix made a sound like thunder. Dragon did too. Added to Elephant’s trumpeting, the three calls blended into something like the roaring silence of a Lion Samadhi, and illusion was no more. Fiery radiance blissfully undulated as all that IS.

6 Responses to A Journey Within: 4