Posted on August 7, 2012 by Donna Mitchell-Moniak 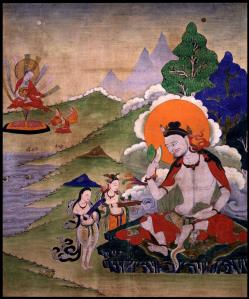 Each encounter ends with rainbow lights, a mystical voice of wisdom, and Naropa swooning to fall unconscious. When we wakes up he resumes his prayers and journey as if no smarter from the previous event. We usually do the same. A lesson comes, we tell ourself or someone tells us of the wisdom or kindness opportunity that we have just missed, and we go unconscious again as if the whole event, all the feelings we experienced, and the possible wisdom or compassion didn’t happen. We, like Naropa, usually just proceed.

He encounters a man on this third excursion. Why a man, we should ask? Because male expressions of divinity are more noticeable, blatant in fact. Feminine expressions are all around us all the time; this is after all “Mother Earth.” And so it was with the first two encounters and parenthetically the first instance that set him on his journey from Nalanda where he was abbot. A toothless hag told him, the great scholar Naropa, that he knew nothing and that he should look for someone who did. We, too, need things more blatant. “I don’t get it,” we say to ourselves when we relive the same circumstances time and again. We’ve had good company! From this point forward, disguised guru Tilopa will be blatant and ever more ridiculous. It is a test. Will Naropa notice – notice anything – or will he just march on to his one pointed goal: to find the guru, thereby find the answer and inner peace.

Yup, that’s the Path and that’s us too. Our life events, thoughts, words and actions are all pretty blatant and usually masculine in energy. Essentially masculine energy is the expression of singularity. That is a cosmic principle and pervasive in its applications. Within the human psyche it creates as many benefits as it does difficulties. And the same is so for feminine energy which essentially expresses inclusion. Thus far it has been Naropa’s singleness of mind, separateness of heart and character, and self-centered importance that has created his blindness. He does not perceive the leper woman as anything but disgusting and a bother on his way. The vermin infested bitch similarly. He cannot include them in his time and rejects them from his mind: through pride and revulsion with the leper and through insignificance with the dog. All these are expressions of masculine energy (of course, energy is not the same as gender), being single-self derived.

The man Naropa encounters is carrying a load. “Have you seen the venerable Tilopa?” he asks. “No,” the man replies, “but behind this mountain is a man playing tricks on his parents. Ask him.”

All spiritual allegories and myths are products of their time and culture as well as being eternal mystery plays. The phrase “playing tricks on” a thousand years ago in India meant to cheat someone into doing something, to turn their head so to speak as in slight of hand when our attention is diverted. Once again every part of this vignette is reporting something. “Behind this mountain” means behind Naropa’s yet unconquered mind and his belief in a single and separate self. “is a man playing tricks” refers to the trickster of ego. “on his parents” This is an immediate reference back to the just passed event with the bitch-dog wherein he was told that “all living beings are by nature one’s parents.” In other words, the unconquered mountain of the ego driven mind and the separating mind nurtured sense of self is constantly tricking (him) us to not only deny interconnectedness and interdependence, but as a result we/Naropa are inevitably cheating ourselves and others of the same blessings of interconnectedness.

We also should not loose sight that the man was carrying a load. Did Naropa offer help? No, but in that day and culture that would have been the norm. That, however, does not make it right. Tilopa is the man carrying the load, thus offering Naropa any number of opportunities to do something out of his norm, to digress from his patterned thinking and ways of being. To have offered help would have been unusual – excellent! – that’s what the Path is always asking of us. When compassion, selfless generosity, wisdom and its emptiness are our norm, then pride and selfishness will be unusual.

Also the man carrying the load is Tilopa mimicking Naropa. Naro is burdened by his pride, his thoughts about what needs to be done and what that should look like, and he is burdened by frustration and disappointment. Tilopa is mirroring to Naropa, and our life is that for each of us: a perfect reflection.

Naropa takes the bait and “crosses the mountain.” He finds a man who says, “Yes, I have seen him but before I tell you, help me turn my parents’ head.” Naropa thinks, no way! I am a prince, a monk, and a scholar. I will seek the Guru in a respectable way according to the Dharma.” If this were a game show, we’d hear the “wrong” buzzer right now. Once again, pride has been Naropa’s downfall. He’s too haughty-taughty to be involved in such crass things. But then he adds insult to injury by stating that he’s in alignment with the Dharma. Well, where was the dharma with the first two experiences? We do this too. We chose when to use our convictions and discipline and when not to. We play (cheat) with right and wrong, truth and lies, taking care of our health and well-being, living with conscience on the planet, and so on. We pull righteousness out of our pocket when it suits us and release ourselves from piety when our desires are more important.

Of course, everything disappears into rainbow light and Wisdom’s voice rings.
“How will you find the Guru, if
In this doctrine of Great Compassion
You do not crack the skull of egotism
With the mallet of non-Pure-Egoness and nothingness?”

We’ll leave you with this one. Write back a comment on what your contemplations provide.

Visit www.blazinglight.net for additional meditations and blog posts.
View all posts by Donna Mitchell-Moniak →
This entry was posted in Vajrayana and tagged awareness, Naropa, non-dual, tantra. Bookmark the permalink.