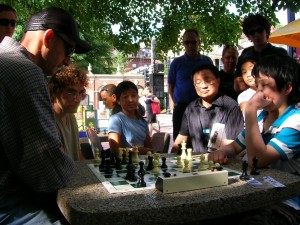 It was a summer day in Cambridge, Mass. in 1987, with people from everywhere around the world strolling through Harvard Square or reading on benches or playing chess. Hankering for a new book, I entered the only esoteric bookstore in Cambridge. A wall of blue caught my eyes and like a bee to a flower I was beckoned. All of these blue books were by one author and all had the same plain blue cover, and each one felt delightful in my hand. A sweetness ran through my heart, light and excitement billowed in my mind and I went home with Treatise on White Magic, the Way of the Disciple by Alice A. Bailey. That moment has led to everything else of my spiritual journey as a student, a teacher, an author and meditator.

The Master Djwal Khul began to telepathically communicate with Alice A. Bailey in 1919, but she did not start to take the dictation that became the blue books until 1925. This unusual relationship lasted through the turmoil of World War II, the rise of socialism, communism and capitalism, as well as the spread of the principles of Theosophy and Anthroposophy through the western world. The last book created through this telepathic rapport was published in 1949.

I bow to the Master DK as a cherished teacher. The Trans-himalayan philosophy has opened many subjects for me, such as astrology, Buddhadharma and physics. The teachings given by DK support me through deep exploration and a cross-referencing type of synthesis. I am forever grateful and offer any benefit generated through my teaching and writing back to the Master and his work.

There is a portion of the Bailey/DK writings that were pertinent in their time and are often misread now. That is true of many writings penned in humanity’s challenging hours. DK wrote to inspire, explain and educate. The Bailey/DK books remain timeless sources for understanding the human spiritual path and how to effectively engage that. It has been my joy to be a student, to lead groups in discussion, and to create curriculum and classes on and born from the Trans-himalayan Wisdom and the teachings of the Master DK.