Posted on September 4, 2012 by Donna Mitchell-Moniak 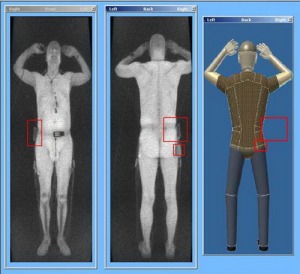 At the airport yesterday morning, I refused to go through the newer type of scanners that American airports are using. Why? Because they are unhealthy for a human being. For this reason they are not used in Europe. (Oh, you mean like fluoridation of water, and genetically engineered foods? Yes.)

We have the choice to refuse to go through the newer scanners. Of course, the airport security doesn’t tell you that. Instead, like cattle we are directed here or there and aimlessly and uninformed, most people just walk through.

The first time I refused was the month they instituted the new machines in many USA airports. Remember? There was an internet flurry to refuse to go through and choose a pat-down instead. Of course, the pat-down was an immediate coercion tactic meant to embarrass and delay those who chose their well-being over the profit margin of the company that sold thousands to these machines to the airports and ideologically to our government.

That first time, no problem. A pat-down didn’t then nor does it now bother me. But this morning, one pat down was not enough. Two is the level of the coercion now being used against those choosing to not walk through these machines. The powers that be are hoping that by embarrassing and inconveniencing the person that he or she will opt for the unhealthy full body scan. Not me.

I asked the second woman doing the pat-down if she knew that these machines are outlawed in Europe, she said no. TSA workers are told, as are you if you refuse, that the level of radiation is similar to that from a cell phone, a microwave, or an x-ray. I told her that I do not own a cell phone and rarely use a microwave by choice for the same reasons.

The population of the United States is the largest lab rat on the planet.

On top of this heinous daily onslaught to the average uninformed American, is the constant prodding to buy into the ignorance. We are told that everything is alright and that if not, our health insurance will take care of it. Error is on both sides of that statement. No wonder the United States population is, in fact, the most diseased of all the developed nations.

Please stay informed about your rights as a consumer, a citizen, and as an airport traveler. Please refuse to hurt your body, your well-being, and the body of our Mother Earth. Instead choose wellness! in every regard. Please check out the links below.  These days information is easy to access. Living healthy is a choice: at the airport, the grocery store, and in our community.

Visit www.blazinglight.net for additional meditations and blog posts.
View all posts by Donna Mitchell-Moniak →
This entry was posted in Health and well being and tagged airport scanners, health, healthy choice, well being. Bookmark the permalink.